WALK AROUND THE DOJO

Let’s start with the Shinto Buddhist shrine known as the ‘kamidana’. It was presented to founder Steve Rowe by one of his Iaido instructors Vic Cook and is a replica of the shrine in the ‘honbu’ Dojo in Japan dedicated to Fudo Miyoo, the guardian of martial arts Dojo’s in Japan and also guardian of the Buddhist way. His statue is on the window sill facing and guarding the Dojo doorway. He has a ferocious expression on his face to scare demons, is surrounded by flames for ferocity, stands on stone for immovability and holds a sword and weighted rope to cut away and bind evil. Inside the shrine is his picture along with a mirror and pearls which according to legend were used to tempt the sun goddess and founder of Japan, Amaterasu out of her cave. On the shrine is also salt, rice, alcohol and oranges to keep Fudo Myoo nourished and happy along with flowers and a ‘zen bow and arrow’ to pierce illusion. 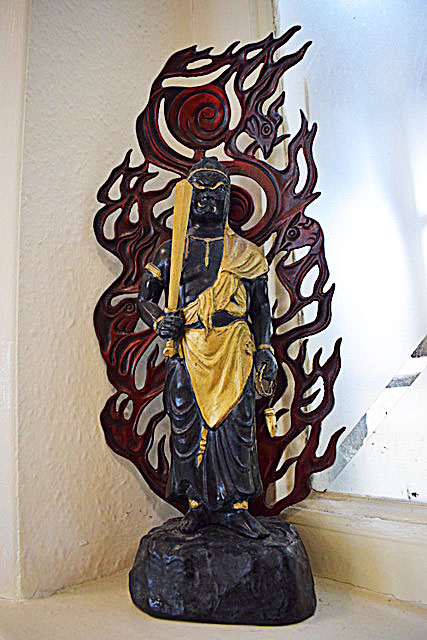 The photos either side of the shrine are of Steve’s instructor in Wado Ryu Karate, Toru Takamizawa and his instructor Hironori Ohtsuka, the founder of the style. 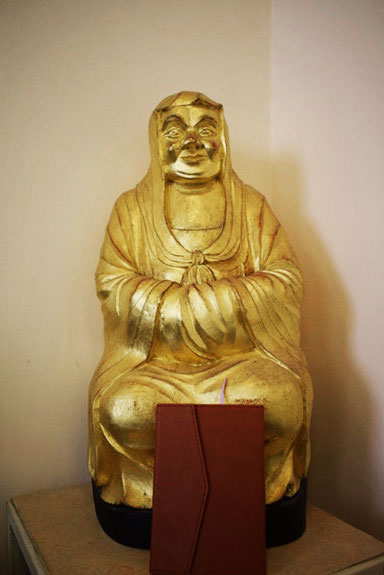 In the corner is a golden statue of Bodhidharma  presented to Steve by Shi Kon member Nathan Johnson, author of ‘Barefoot Zen’ and ‘The Great Karate Myth’ among many other titles, Bodhidharma brought Buddhism to China and the martial arts in the Shaolin Temple, this statue was rescued from a monastery in China by Nathan’s family. The book in front of the statue is a healing book where we write the names of people to send healing to during our meditations.

The Tai Chi shrine has the ancient Tai Chi symbol as the centrepiece, (often called the yin yang symbol) and represents the balance of the universe, the surrounding circle represents infinity along with the curved line down the middle (curved because it is spinning) and the black and white segments representing the opposing forces of the universe that the practice of Tai Chi will harmonise. The photos of the Yang family are Steve’s lineage in Tai Chi in Hong Kong. The charts are of the body core and connected lines of power used in the martial arts. The 8 words on the sign in the middle are the principles of the Shi Kon training system and each one is a doorway to understanding an area of the arts that put together mean that if all 8 are present whatever the student is doing will work. This is the heart of a principle based system.

The painting of the tiger was presented to Steve by some of his students as he was born in the Chinese ‘year of the tiger’ and it’s one of the important animals in Kung Fu.

The 2 calligraphies either side of the logo were presented to Steve by his Japanese Iaido instructor Okimitsu Fuji one is ‘Shi Kon’ that he drew when he named the association and means ‘warrior spirit’ and the other one is ‘hei jo shin’ that he bought back from Japan drawn by a zen priest that means ‘keep your usual (highly trained) mind’.

The doorstep with ‘Shi Kon Budo Kan’ written on it (meaning ‘warrior spirit martial arts hall’) is a gift from a student and there to remind students to clear their mind ready to learn as they bow when they enter the hall.

On the wall over the mirror is a painting of Kuan Yin the Chinese goddess of mercy and compassion and is an original painting given to us and painted by the talented Ray Hunt from Diablo Tattoo parlour and the person that did the tattoos on both Steve and Ann Rowe.

The picture of Steve Rowe was given to him by the first group of students that graduated on his Tai Chi Coaching Programme.

The 2 antique Chinese dragons on the window sill represent the wisdom of the Martial Arts as they are reptiles (bound to the earth) that can fly to heaven, usually by holding a magic pearl. There is a story connected to how Steve Rowe came across these that he may tell you if asked. 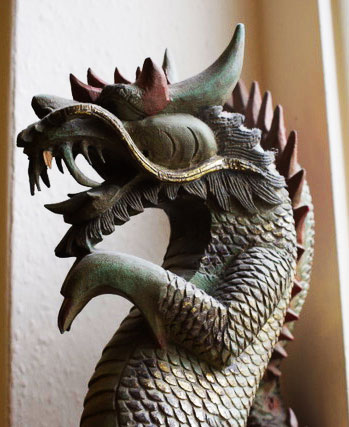 The engravings on the windows are the calligraphy on the middle wall is of the Buddhist heart sutra and focuses on the simplicity of an enlightened and intelligent heart. On the other windows are the Shi Kon logo and the snake and crane representing the legend of Tai Chi being discovered by a monk watching a battle between the snake (representing the human condition of being bound to the earth) and the crane (representing the human spirit able to fly to heaven) where they moved in harmony with each other so neither won.

The picture of the happy Chinese swordsman and butterflies were given to us by our students who founded Shi Kon Trinidad and it represents the lightness and happiness of martial arts training.

Our Chief Instructor Steve Rowe describes the Dojo as a ‘walk round the inside of his head’ and is a record of his 50 years of martial arts study.